Earlier this summer I looked at using maps as primary sources for class as a way to generate discussion and highlight worldviews of the time periods and cultures in which the maps were created.  One of my favorite maps, and one that would be an excellent source in British History courses, is Matthew Paris’ Map of Great Britain, produced in 1250.  This map is now in the British Library. 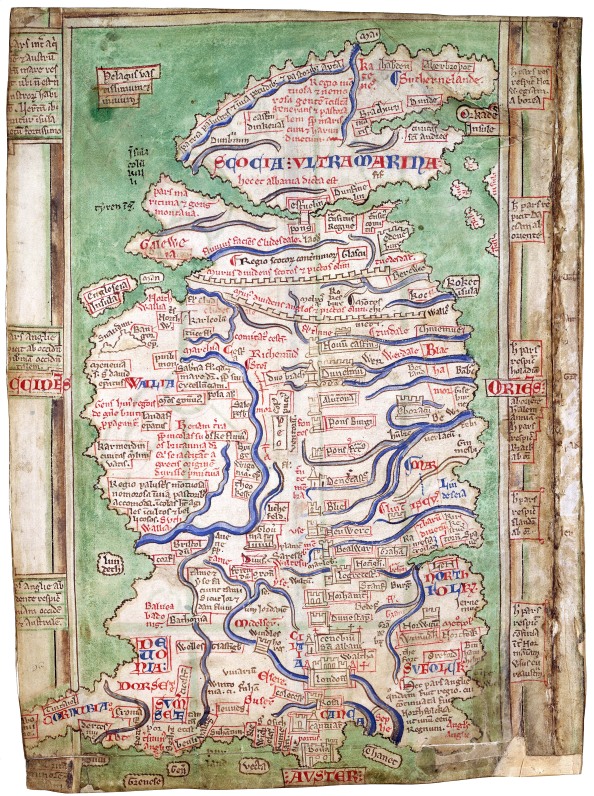 Not only is the map visually appealing, particularly in its use of color, drawings of miniature battlements and city walls, and ability to seize the imagination, it is also the oldest surviving map to show such a high level of detail and accuracy.  Over 250 places are identified on the map, with Scotland clearly set apart by Hadrian’s Wall and the Antonine Wall.  I particularly enjoy the depiction of the Firths of Forth and Clyde sharply cutting through Scotland to almost meet.  Scotia and Wallia (with an elaborate Mount “Snaudun”) are identified by name, along with areas such as Devonia and Sufolck. The side bars identify the nearest land in each direction.  London, in the bottom center of the map, appears to have all roads leading to it (notice how the towns line up above it) along with a snake-like Thames.

We can see that the land depicted on the map is distorted, but even with this it was still extremely accurate for its time.  As the British Library site describes, Paris’ depiction was likely based on both travelers’ accounts and Ptolemy’s geography.

Matthew Paris was a monk at St. Alban’s Abbey in England, where he lived all of his adult life.  He was an historian, writer of chronicles, and artist.  Paris drew four maps of Britain, of which this is the most detailed.

Just think about the Hereford Mappa Mundi from my previous maps post.  As Simon Garfield emphasizes in On the Map, Matthew Paris created his map of Great Britain about fifty years before the mappa mundi was produced, making Paris truly stand out as a unique mapmaker of his time.