It was pretty amazing to find out that a major part of my personal area of study was the subject of its own museum, the Ulster American Folk Park near Omagh in Northern Ireland.  The folk park is a primarily open-air museum, with buildings, streets, and countryside representing the “old world” and “new world” for Ulster emigrants.  Visitors enter in the “old world,” with its thatched roof cottages and village streets with original buildings, historic school house, and the homestead of the Mellon family.  They make their way to the dockside and cross the Atlantic on board a “ship,” and arrive in the “new world,” with historic log cabins and houses that have been brought over from America and reconstructed on site. 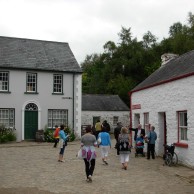 The Ulster American Folk Park was built around the site of the Mellon House, which remains in its original location, and historic buildings from Ulster and America have been moved and reconstructed on site to best portray life on both sides of the Atlantic, centuries of migration, and enduring connections between Ulster and America.  Truly an impressive undertaking to create a site with historic and representative buildings, demonstrations, and even animals and crops to portray their region and time period.